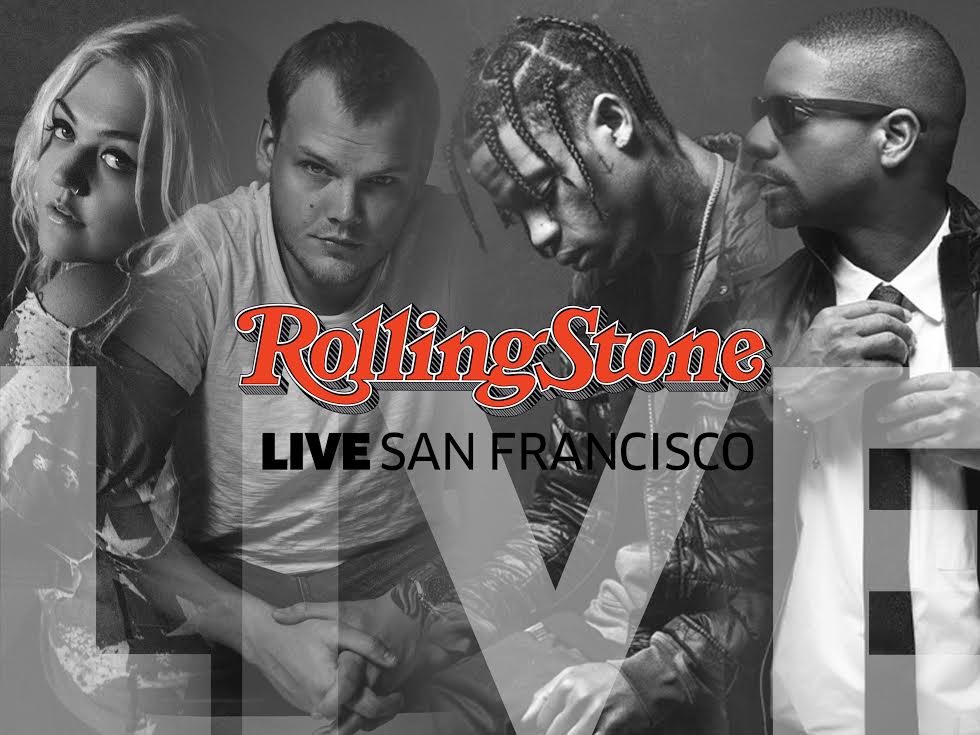 You might be able to catch Multi-Platinum Artist Avicii on tour, the edgy Hip-Hop enigma Travis Scott at an amphitheater sometime, or Elle King and her unique sound at a small venue. But you will never be able to see all three blow the roof off an intimate Super Bowl Party, with the most premium spirits known to mankind flowing all night long, and partying among the NFL and Hollywood elite in San Francisco. Trust us when we say that Rolling Stone has done this before and it is pulling out all the stops to make this the best party of Super Bowl weekend.

Kicking off February 6th at 9pm, Rolling Stone’s fifth annual Big Game Bash, Rolling Stone Live: San Francisco, will be held at The Galleria within the iconic San Francisco Design Center, located in the heart of the Design District. The luxurious event space will host top celebrities, athletes, and influencers in town for the weekend, and feature special performances by today’s hottest artists.

“We are excited to bring Rolling Stone Live to San Francisco this year during the big game weekend and showcase incredible musical talent for our guests,” says Michael Provus, Publisher, Rolling Stone. “We look forward to once again partnering with TOAST, Bookem Danno and Talent Resources Sports.”

New and exclusive at this year’s event will be a private TAO-branded VIP area for celebrities and invited guests who will be treated to the world renowned hospitality of TAO, known for their luxurious NYC and Las Vegas outposts. Heineken and Heineken Light will be the official beer partner of Rolling Stone Live: San Francisco. This event continues Heineken’s long-standing commitment in the world of music and entertainment and its mission to bring consumers access to world-class events. Belvedere is thrilled to be the official vodka partner of the event. Belvedere’s distinctive character and uncompromising integrity are recognized internationally.

Avicii has become one of the most prominent Pop/EDM/Dance artists in the world. In 2014, he was ranked by Forbes as one of the top 3 highest paid DJs, behind Calvin Harris and David Guetta. Millions of pop and dance fans will know his major hits “Levels,” “Wake Me Up,” and “Hey Brother.”  In 2013″Levels” was nominated for the Best Dance Recording at the 2013 Grammys.  Watch this electric performance from Tomorrowland.

Travis Scott, rumored to be dating Rihanna, is a hip-hop artist and producer best known for his anthem “Antidote,” which has over 64 million views on Youtube. Though has appeared on several mixtapes, he debuted his album Rodeo on September 4, 2015. Watch this post-BET Awards performance to get an idea of what to expect from a Travis Scott performance.

Since this event is invite-only, the aftermarket is the source for tickets. We researched ticket prices, and compared the top 3 sellers for you:

Rolling Stone has been the leading voice of music and popular culture for more than 47 years. The multi-media brand features the latest in music reviews, in-depth interviews, hard-hitting political commentary and award-winning journalism across many platforms including magazine, digital, mobile, social and event marketing. Rolling Stone provides “all the news that fits” to over 40 million fans of the brand every month. Owned by privately-held Wenner Media, which also owns and publishes Us Weekly and Men’s Journal, Rolling Stone is headquartered in New York. For more information, please visit www.rollingstone.com.

Talent Resources Sports (TRS), a business entity within Talent Resources, facilitates a wide variety of athlete engagements including product placement, personal appearances, and long-term brand endorsements. TRS works with corporate clients to integrate athlete-driven campaigns into an overall marketing strategy. TRS partners with properties and lifestyle brands like Rolling Stone to create fully integrated programs that bring brands, athletes, celebrities and audiences together. TRS center’s these events around big conversations to maximize exposure and participation. We exist at the intersection of sports and entertainment.

Watch our footage from past events: