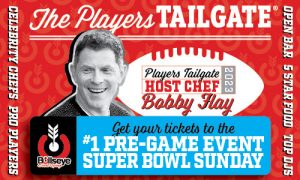 The 2023 Players Tailgate will also feature limited inventory of reserved VIP Cabanas for parties of 12. For more details about VIP Cabanas and VIP Packages click HERE

You do NOT need a Super Bowl Ticket to get into the Players Tailgate. You just need your Tailgate ticket. Parking is not included with tailgate ticket and all ages are welcome.

This year’s venue for The 2023 Players Tailgate is located on the grounds of the Tanger Outlet property which borders the stadium. An open-air venue along with red carpet transforms the space into a once-in-a-lifetime tailgating experience and State Farm Stadium is its backdrop. Ever year, SuperSundayHQ has attended this event as the food & the entertainment are amazing. It’s hard for other parties (or tailgates) to beat the out of this world food produced world renowned chefs!

Bullseye Event Group’s exclusive Players Tailgate before the Super Bowl has earned the reputation as the best pre-game experience, where over 50 active NFL players, celebrities and guests eat, drink and get entertained before the big game. Described as a culinary experience in itself with America’s top chefs, The Players Tailgate features: live performance by their headliner DJ Irie, open premium bars and all-you-can-eat dining with gourmet dishes prepared by 10+ Celebrity Chefs. Players Tailgate guests will be able to choose from the premium beer, wine and spirits options. The 2023 Players Tailgate will feature limited inventory of reserved VIP Cabanas for parties of 12.

Chef Bobby Flay is this year’s Bullseye Event Group honored chef for the 2023 Players Tailgate and Chef Aaron May also be in attendance! Bobby Flay is a culinary icon and Emmy award-winning host of many cooking programs since his debuted on Food Network in 1994. Flay has also been honored as the first chef to receive a star on the Hollywood Walk of Fame. As for Chef May, he is considered the BEST caterer in the US. Chef May was classically trained in Paris at the Ecole Ritz Escoffier and inducted into the Arizona Culinary Hall of Fame in 2010 as a “Chef Extraordinaire.” Past Chefs & Headliners include:
Guy Fieri, Todd English, Antonia Lofaso, Burt Bakman, Michael Voltaggio, Rocco Whalen, Leonard Botello, Brooke Williamson and Nyesha Arrington.

Returning Players Tailgate Emcee will be Sage Steele. Ms. Steele is one of ESPN’s most popular and respected commentators, currently serving as the anchor for the 6 p.m. ET SportsCenter with her co-anchor Kevin Negandhi. She also serves as the lead host for SportsCenter on the Road. Past Emcee’s have been: Michael Strahan, Erin Andrews, Lindsey Czarniak, Jaymee Sire and Charissa Thompson.

Bobby Flay is a culinary icon and Emmy award-winning host of many cooking programs. Since debuting on Food Network in 1994, Flay’s first show, Grillin’ & Chillin’, premiered in 1996, followed by Hot Off the Grill and Boy Meets Grill. Bobby currently stars in Beat Bobby Flay, the Emmy-award winning Bobby Flay’s Barbecue Addiction, Food Network Star, Iron Chef Gauntlet on Food Network, as well as Brunch @ Bobby’s (as seen on both Food Network and sister network Cooking Channel), which has earned him Emmy nominations and wins over his career. Flay has also been honored as the first chef to receive a star on the Hollywood Walk of Fame,

Chef Aaron May a top chef in America can prepare an incredible meal for 2 to 200 people, in order to considered one of the best caterers in America you need to be able to create a meal for 2200 and have it as good as that meal for 2 to 200. That is why Aaron May is considered the BEST caterer in the US. Aaron has been part of The Players Tailgate for the last 5 years. Chef Aaron May has ownership in Bullseye Catering Group where he makes his awesomeness available to you. Chef May is classically trained in Paris at the Ecole Ritz Escoffier and is inducted into the Arizona Culinary Hall of Fame in 2010 as a “Chef Extraordinaire.” He has been featured on Food Network’s wildly popular Diners, Drive-Ins and Dives and TLC’s Best Food Ever. Chef May has garnered attention from national publications such as Food & Wine, Condé Nast Traveler, Sunset Magazine and USA Today. Given his passion for food and irrepressible creativity, is why he is considered one of the top caterers in America.

Sage Steele is one of ESPN’s most popular and respected commentators, currently serving as the anchor for the 6 p.m. ET SportsCenter with her co-anchor Kevin Negandhi. Steele also serves as the lead host for SportsCenter on the Road.Steele’s lead role for SportsCenter on the Road includes on-site, day-long and pre-event coverage for the biggest sports events of the year, including the NBA Finals, the Super Bowl, World Series, the Masters, the College Football National Championship and many more. Steele was named SportsCenter on the Road host in September of 2016. Steele showed her great range in sports by formerly hosting NBA Countdown on ESPN and ABC for four seasons/ For five years prior to the NBA assignment, Steele was a full-time host of SportsCenter ESPN’s flagship show, and had previously contributed to ESPN First Take, Mike & Mike in the Morning, and SportsNation. Steele hosted SportsCenter’s daytime coverage of the NBA Finals in 2012 and 2013, and has covered every NBA Finals since 2012.

As the first professional sports franchise DJ in the United States, DJ Irie is the official DJ of some of the most iconic brands in the world, such as Carnival Cruise Lines, the Miami Heat, Target, Mountain Dew Kickstart, Evian, Jamie Foxx and more, making himself one of the most established DJ’s in the industry. At the 2017 Players Tailgate at Super Bowl LI, DJ Irie provided his world-class entertainment to help set the stage for the biggest and best pre-game tailgate in Houston before Super Bowl LI. In 2018 DJ Irie was donned “The Official DJ” of the Players Tailgate and holds that title each year.

Irie Foundation works year-round to improve and create a positive impact on the lives of South Florida’s at-risk youth. Through a number of proactive initiatives, we are committed to helping kids get on the right track and strive for successful futures. Currently in the process of building the all new Irie Rhythms Academy, a state-of-the-art music and technology center where children will have the opportunity to take part in music lessons, learn the art of photography, radio broadcasting, film, and the structure and processes of a professional recording studio at no cost to them.