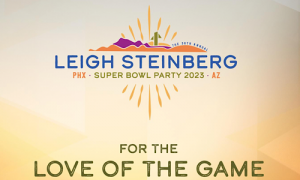 WHERE: The Salt River Fields at Talking Stick Phoenix AZ.

For Sponsorship Inquiries, please reach out to leeann@steinbergsports.com

This year’s event will take place at The Salt River Fields at Talking Stick, Phoenix, AZ. This year’s theme of the event will celebrate not only “the big game” but the love of EVERY game and the impact their players, coaches and partners can make in the world.

“The “love of the game” extends beyond football… The camaraderie, passion, discipline, teamwork, and dedication of loving a sport can extend far beyond the field or the court. If harnessed, the love of the game can translate to a love of humanity. Athletes and their teams have the power to inspire, teach, raise awareness, and bring goodness into their communities.”

We at SupersundayHQ can’t wait to see how they will be celebrating this special theme at such a memorable venue in their 36th year! The “love of the game” & it’s extension should be embraced throughout humanity as well as other parties.

The event will also feature The 10th Annual Brain Summit and the Steinberg Denicola Humanitarian Awards. The Steinberg DeNicola Humanitarian Awards recognizes outstanding individuals in the NFL community that devote and dedicate their time to address community issues and the welfare of humanity. Also at the party, there will be many amazing sponsors and partners, gourmet stadium cuisine, cocktails featuring Bennie Red Vodka and Cabal Tequila.

Each year the Leigh Steinberg Super Bowl Party shines a light on a standout non-profit organization to bring awareness to their cause, highlight the work they do and raise funds to help. Past organizations have included The Lantern Network, Make-A-Wish Foundation, and Special Olympics. This year’s featured non-profit organization that will be spotlighted is the Champions for the Homeless at St. Vincent De Paul’s Homeless Shelter, a local Phoenix organization founded by former NFL Hall of Fame player Nick Lowery, will be in the spotlight. Champions of the Homeless puts a human face on those that are homeless.

Leigh Steinberg’s work in the community matches that of his career in representation, with being credited for helping raise over $800 million for charity. He has received four Presidential Commendations for community service, in addition to the key to five cities. Mr. Steinberg consulted on films: Jerry Maguire, starring Tom Cruise; Oliver Stone‘s Any Given Sunday; and For the Love of the Game, starring Kevin Costner. Leigh is the author of two best-selling books, “The Agent” and “Winning With Integrity: How to Get What You Want Without Selling Your Soul.”

For 16 years they have served close to 100,000 of the homeless population in Phoenix, 35% of which are veterans. The group hosts events with professional athletes on Thanksgiving, Christmas, Easter, and more, bringing in donations of thousands of goods such as socks, shirts, and underwear. They also helped to make Phoenix the first city in the country to provide free COVID testing for the homeless in April 2020. At each event – they seize the opportunity to tell the human stories of the community. 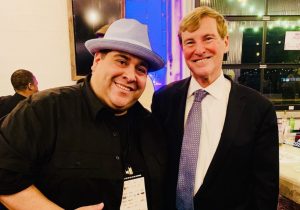 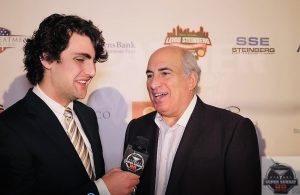 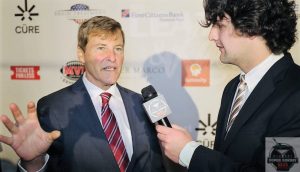