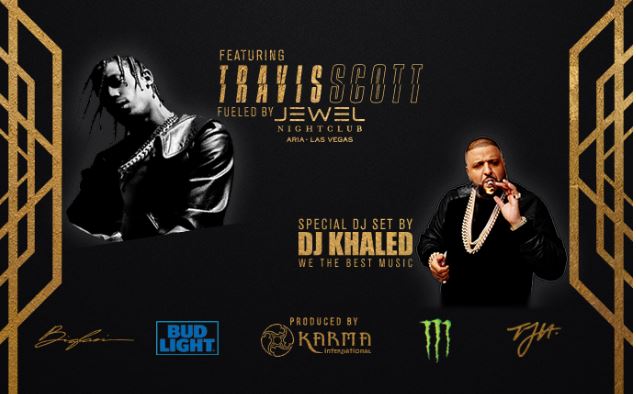 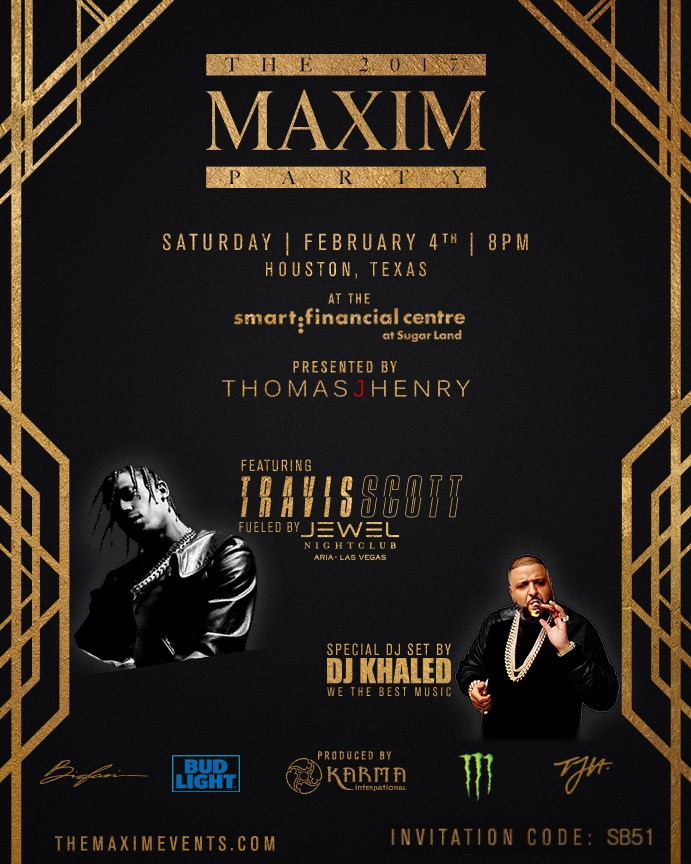 Karma International has shared with Super Sunday HQ that ticket sales (The Maxim Party (official invite code: SB51) have started to pick up after the recent announcement that Travis Scott and DJ Khaled will perform at the Maxim Super Bowl Party in Houston (Sugarland, TX). No one, but Super Sunday HQ, can say they’ve been to the last 8 Maxim Super Bowl Parties AND been to 3 Karma International-Produced MAXIM Parties in the last 12 Months (Super Bowl, Hot 100, Halloween). With amazing celebs, incredible atmosphere, gorgeous social media models, and top-notch performers, Karma International has consistently proven to us that it knows how to throw an over-the-top, fun party.

It’s no secret that the hottest social media models love hip-hop. One can only image the electricity in the air when Travis Scott and DJ Khaled provide the soundtrack to the one of the biggest bashes of the year getting the unbelievably good looking crowd to go crazy. Many music fans know Travis Scott from his platinum hit “Antidote,” but with nearly 300 million overall music video views on YouTube, over 3 million Instagram followers, and recent hit “Goosebumps” shredding the airwaves, Travis Scott is one of the hottest hip-hop artists out there. But DJ Khaled is THE DJ for any hip-hop party, and Maxim, like EA Sports & Pepsi at Super Bowl 50, has signed him to perform a set.

For the last decade, The Maxim Party (official invite code: SB51) has been in a class all its own as one of the most sought-after Super Bowl Parties of the year… In 2016, Maxim upheld its dominance in San Francisco as one of the best parties for the Big Game Weekend for the 10th year in a row by taking over Treasure Island with 3,000+ attendees, celebs, VIPs, tastemakers and the world’s top press. Maxim plans to once again raise the bar during this milestone weekend of sports and over-the-top events in Houston, Texas on February 4, 2017 during Super Bowl weekend at the Smart Financial Centre in Sugar Land. The party is presented by Thomas J Henry, one of the biggest personal injury firms in the country, with sponsors such as Bud Light, Monster Energy & more. 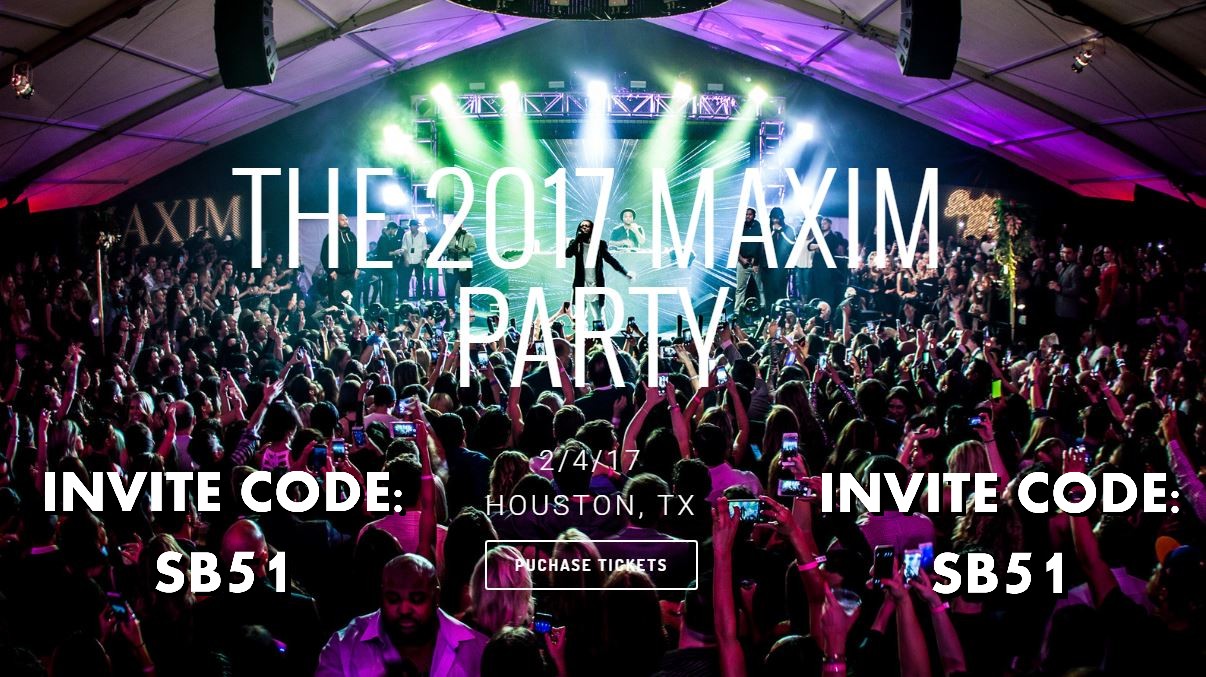 Opening in January 2017, Smart Financial Centre at Sugar Land will be a state-of-the-art venue offering concerts, performing arts and more. 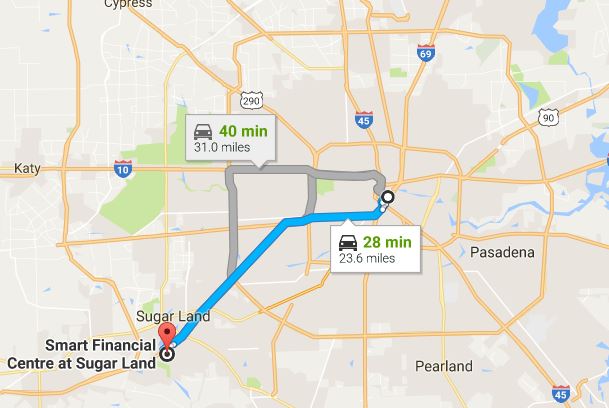 There’s only one Super Bowl 51 weekend in Houston. Don’t make the mistake of going cheap with one of the many questionable “Eventbrite” parties out there.  If this sounds fun to you, then splurge, go for it now, before tables & tickets sell out or increase in price (originally $750). Think you have what it takes to be a Maxim Model? For a limited time, Karma International is accepting applications for “sponsored tickets” for qualifying people. Click the image above to learn more!

According to Karma International: Due to the exclusive nature of these legendary events, and very limited availability of access, we have a strict process for guests who wish to attend. Guests wishing to attend must have a valid Invitation Code, SB51, to arrange Tickets & Tables. 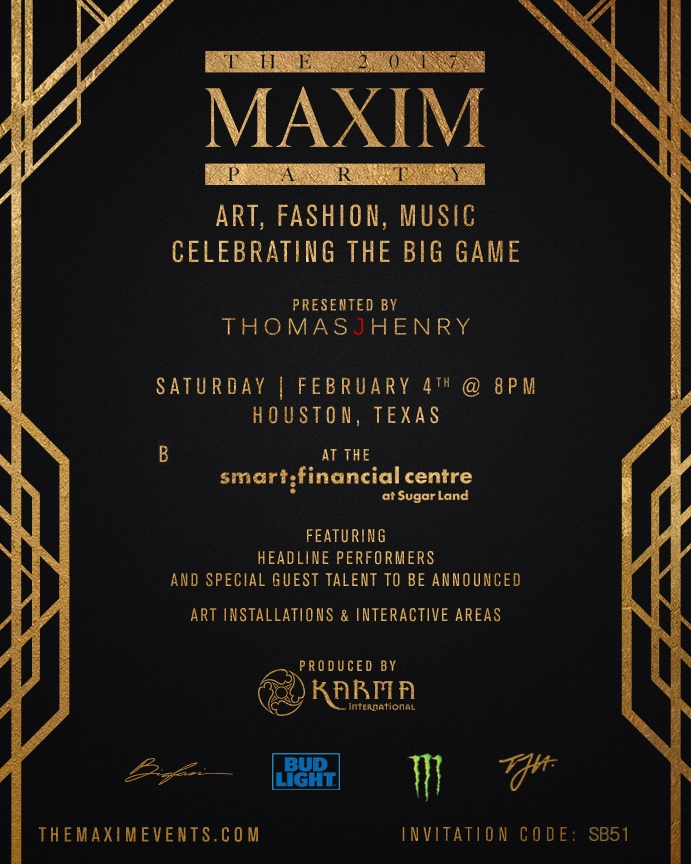