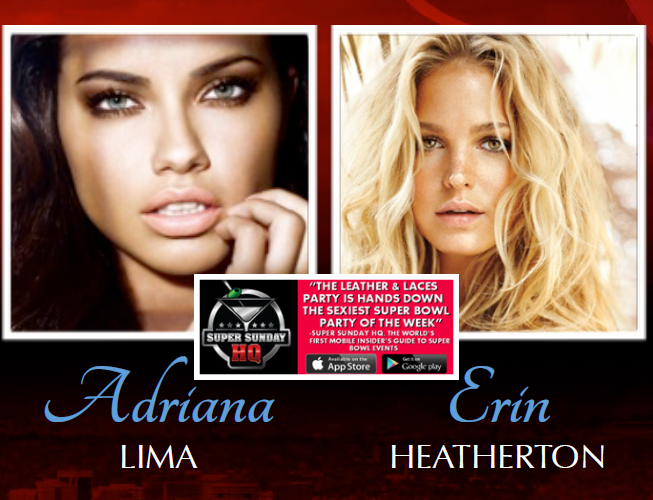 The Super Sunday HQ Mobile App Community Heard it First! Our news team reports that the Leather & Laces Super Bowl party is bringing sexy back to the Big Game Weekend, as Victoria’s Secret Models Erin Heatherton and Adriana Lima are set to co-host one of the most glamorous events of the week-long festivities before Super Bowl 49. Concerts will come and go, but where else will you get an opportunity to party in the same venue as two of the most beautiful women in the world? Check out our video links below, and you’ll also notice that there are several lingerie-clad women all over the party and dancefloor. The Leather & Laces bash is exactly the kind of unique event that you can only find during Super Bowl week, which also features an open bar, entertainers, and other cool amenities. Other big celebs are also known to frequent this event. Just last year, Steven Tyler, Justin Bieber, Paris Hilton, Kyle Busch & many more stars attended the star-studded party.

Erin Heatherton was discovered by a scout while vacationing with a friend in Miami. At the age of 17 Heatherton moved to New York City.
In September of 2006 she launched her career walking for Diane von Fürstenberg.

Adriana Francesca Lima was born on June 12, 1981 in Salvador, Bahia, Brazil. At the tender age of 13, Adriana entered the Ford Supermodel of the World Contest, where her unique beauty,
derived from her Native-Brazilian, African-Brazilian, Portuguese, French, and Caribbean heritage, won her second place.

Moving to New York at age 16, Adriana joined the Elite Model Management and further pursued her modeling career, landing a campaign for the fashion designer Anna Molinari’s clothing line. However, it was her appearance in several Guess? campaigns that gained her the recognition that catapulted her to her status as one of the world’s top fashion models. Since then, she has appeared in campaigns for Anna Sui Jeans, Bebe, Gasoline, Mossimo, Victoria’s Secret, BCBG, Keds, and XOXO, and has appeared on the covers of magazines such as Vogue and Marie
Claire.

She consistently appears in the hyped Victoria’s Secret Fashion Shows, gaining recognition as one of the Victoria’s Secret’s Perfect 10. In her spare time, Adriana dedicates her services to
help orphans in her native Brazil. She has appeared in the Italian.