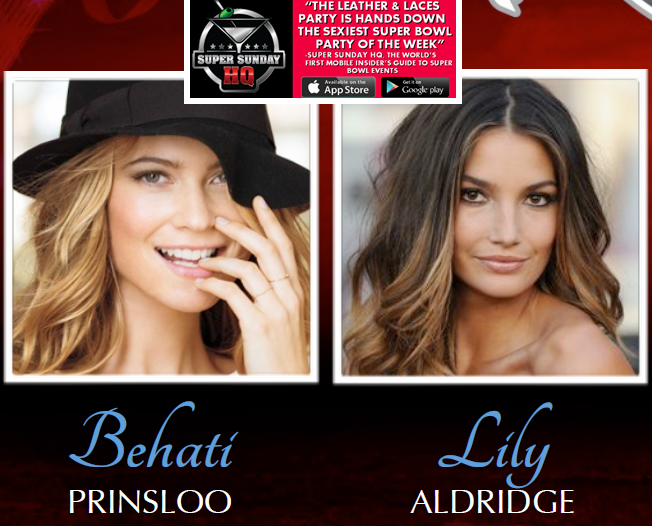 The Super Sunday HQ Mobile App Community Heard it First! Our news team reports that the Leather & Laces Super Bowl party is bringing sexy back to the Big Game Weekend, as Victoria’s Secret Models Behati Prinsloo and Lily Aldridge are set to co-host one of the most glamorous events of the week-long festivities before Super Bowl 49. Concerts will come and go, but where else will you get an opportunity to party in the same venue as two of the most beautiful women in the world? Check out our video links below, and you’ll also notice that there are several lingerie-clad women all over the party and dancefloor. The Leather & Laces bash is exactly the kind of unique event that you can only find during Super Bowl week, which also features an open bar, entertainers, and other cool amenities. Other big celebs are also known to frequent this event. Just last year, Steven Tyler, Justin Bieber, Paris Hilton, Kyle Busch & many more stars attended the star-studded party.

Lily Aldridge is a Victoria’s Secret “Angel” and a Sports Illustrated Swimsuit Issue model, appearing alongside Chrissy Tiegen and Nina Agdal for the cover of the issue’s 50th anniversary.
Aldridge started modelling at the age of 16, for Abercrombie & Fitch. Her advertising campaigns include Arden B., Bobbi Brown, Gap, Tommy Hilfiger, Coach, JCrew, Charles David and Levi’s. Aldridge has appeared on the covers of Glamour, Vogue, Elle and others. She has been featured in editorials for Glamour, Cosmopolitan, Teen Vogue, Harpers Bazaar, Lucky and Marie Claire.