04 Feb THE ROAD TO TAMPA BAY SUPER BOWL PARTIES AND PREGAME TAILGATES: IT HAS BEEN A PLEASURE INTERVIEWING BOTH, THE TAMPA BAY BUCCANEERS’ RB LESEAN MCCOY AND THE KANSAS CITY CHIEFS’ RB LE’VEON BELL, AT SUPER BOWL PARTIES THROUGHOUT THE YEARS! CONGRATULATIONS TO THESE MEN & THEIR TEAMS PLAYING IN THE SUPER BOWL THIS YEAR! 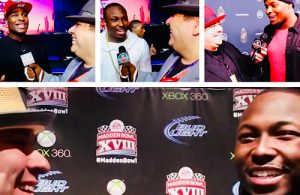 This Sunday, it’s LeSean vs Le’Veon! LeSean McCoy and Le’Veon Bell will be battling for a Super Bowl ring, Sunday, February 7th! These two Veteran NFL running backs have given us, at SSHQ, the most lively interviews throughout our years & we can’t wait to see them compete against each other!

LeSean McCoy is 22nd all time on the NFL’s rushing list with 11,102 career yards. This season, he has been a real mentor to Tampa’s running backs and is making his second  Super Bowl Appearance.

Le’Veon Bell is also a veteran running back and this year has played a role in Kansas City’s journey to the Super Bowl with 254 rushing yards and two TDs and also has been a mentor to his team as well. Despite Bell’s healing knee injury, we will see how much he can contribute in this Sunday’s big game.

No matter who wins, both of these guys have bestowed so much to this sport, this position and deserve to be on this stage especially now in their careers. May the best “Le” win!