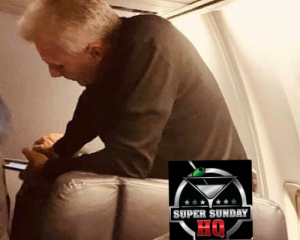 On Super Bowl Sunday, part of Supersundayhq’s crew, after a long fun filled week of covering all the major Super Bowl parties, boarded a flight from Atlanta to the West Coast! They had the pleasure of watching the entire Patriots verses the  LA Rams Super Bowl game while on the airplane. The best part of our flight was not the tiny bags of pretzels, but getting to watch Tom Brady, whom I attended high school with, accomplish what no other quarterback in the history of the NFL has never done: winning a sixth Super Bowl. A lot of people like to compare Tom Brady to his childhood quarterback idol (like all kids growing up in the Bay Area) and that’s Joe Montana!
Speaking about Joe Montana, he actually sat behind me on the airplane & watched Brady win his sixth championship as I sat in the front row of the aircraft. But before that happened, Joe sat down behind me and SSHQ crew member Kevin and I overheard Joe’s request to the flight attendant (a very sweet lady by the way.) She accommodated Joe request for his friend to switch seats with the person sitting next to him. Joe’s friend was, none other than Super Bowl Champion and fellow NFL Hall of Famer, Ronnie Lott. Only one other person recognized the pair of Hall of Famers aside from us! The best part is that the sweet flight attendant had no idea who these two guys were & awkwardly asked Joe, “So you guys know each other?” Joe looked at Ronnie with the best response (that had me giggling in my seat!) “We used to work together.”
After the game was over and we landed, Joe was very quiet, as usual, and when he & Ronnie filed out, they practically sprinted past the terminals like old times.
I’m sure, like all of us, after that big Superbowl week, Joe was probably tired, wanted to go home, get some rest. It was an honor to watch another Super Bowl just a few feet away from Joe Montana, as SSHQ did in NYC: when the Seahawks took on the Broncos. When we have been around him, he has always been a gracious gentleman. That’s not always the case with some athletes, their personas can be different when they are off the field, which always makes him an idol in our book! 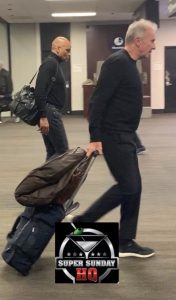