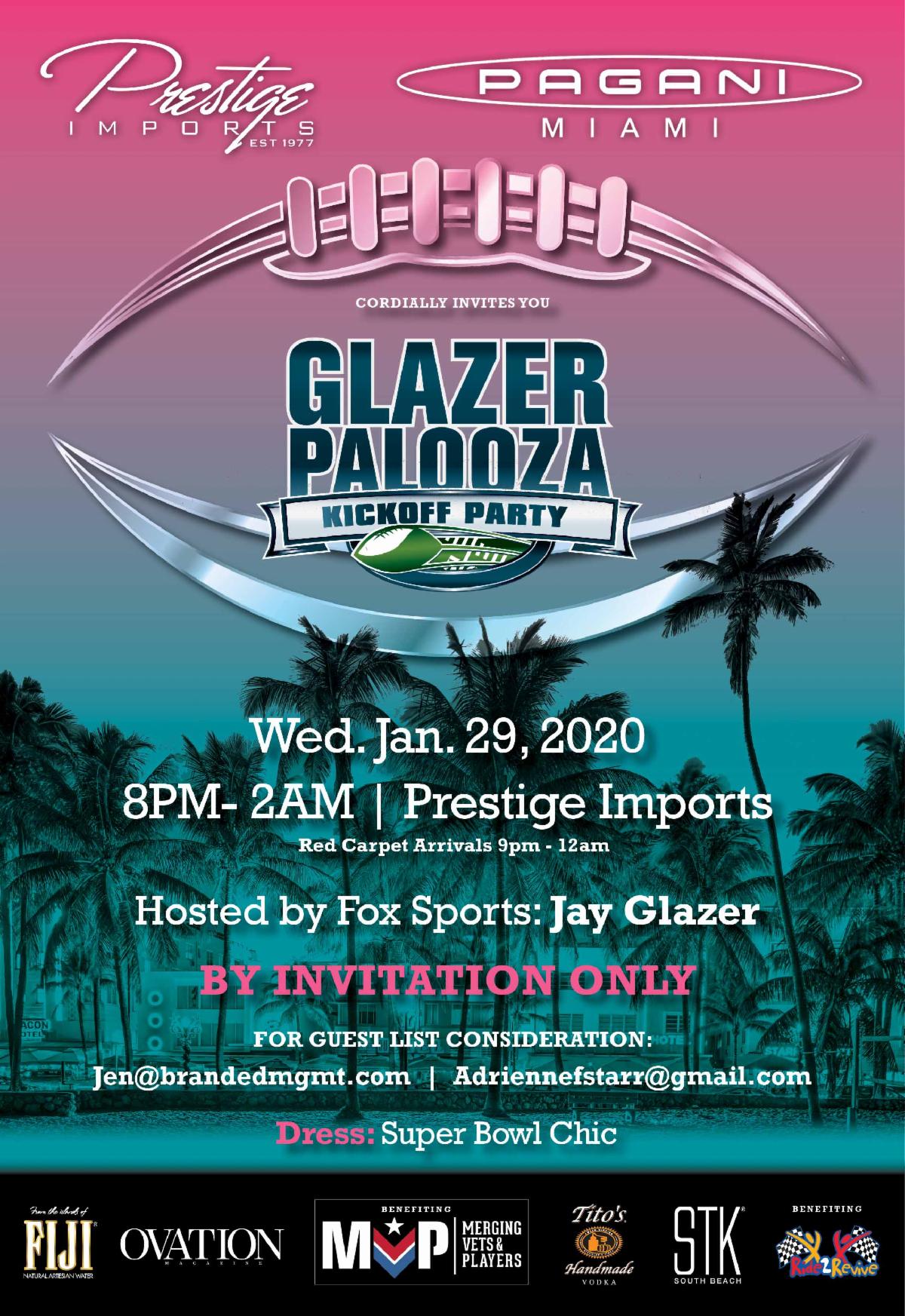 Jay Glazer and his friends return for their annual Wednesday Night Kickoff Party, GlazerPalooza! Benefitting MVP (Merging Vets and Players) and Ride 2 Revive, the event will draw major athletes and celebrities who will support the NFL insider by raising funds for these great charities! Helping to power this Kickoff Party are: Pagani Miami, Prestige Imports, Fiji Water, Ovation, Tito’s Vodka and STK

We at Supersundayhq have had the privilege of covering this event at least five times! It really is the best Kickoff Party during Super Bowl Party week! Jay Glazer really has a long list of celebrity friends and athletes, you never know who will show up! Glazer also has a way of helping others through these celebrations and we commend him for it!

ABOUT: Jay Glazer
Founder, Merging Vets & Players, Jay Glazer is best known for his work on FOX, covering the NFL and UFC. He has long been recognized as the nation’s Top Insider for his role on the award-winning FOX NFL Sunday, where he consistently breaks huge news stories. Jay’s success is attributed to his strong relationships with players, coaches and executives, and the respect he is accorded for being a man who is loyal, honest and hard working.

Glazer, who has a deep background in mixed martial arts, is revered as a coach who created MMA Athletics, the first ever mixed martial arts cross training program for pro athletes. In the NFL alone he and his coaches have trained nearly over 200 players.

Last year, Glazer opened Unbreakable Performance Center in Hollywood, CA with Bears future Hall Of Famer LB Brian Urlacher and the three-time Olympic team captain of the US Women’s volleyball team, Lindsey Berg. In July of this year, Unbreakable was named by Yahoo as “The Most Elite Gym in America.”

ABOUT: MVP (Merging Vets and Players)
Jay Glazer and Nate Boyer created MVP in 2015 to address this important challenge.

Jay has spent years working with warriors from the ring and the gridiron, many of these men and women have also struggled to apply their skills beyond their field of battle.

Nate is a U.S. Army Green Beret Veteran and former NFL athlete who played with the Seattle Seahawks. Living both lives as a veteran and former professional athlete, he brings years of paralleled experience of our members of the loss of identity, purpose, and community.

MVP was created to leverage Jay and Nate’s unique role at the crossroads of all of these warriors. By merging veterans with players, these warriors can benefit from each other’s strengths, experience and abilities to unlock their full potential – and lead their families, communities and country towards a better future. Merging Vets and Players ensures these men and women know that the challenges they are facing are far more about who they are – Warriors – than what they did in the military or on the field. In reality, that is a title that no one can ever take from you.


ABOUT: Ride 2 Revive
Brother and Sister, Brett & Brooke David founded Ride2Revive in 2011. Fulfilling a dream to share their world of exotic supercars, this unique altruistic organization provides children, who are undergoing medical treatment for life-threatening illnesses, with unforgettable adrenaline filled experiences. Each event is meant to distract each child from their health-related struggles and revitalize their senses.