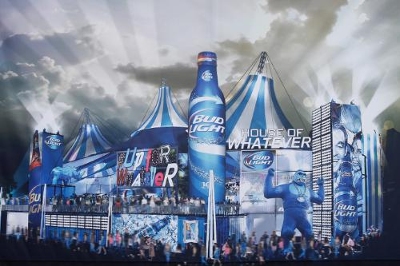 For Super Bowl XLIX, Bud Light will transform the Hotel Palomar in Phoenix at CityScape downtown to an invite-only epicenter of Super Bowl Parties on Friday, Saturday & Sunday. DJ Steve Aoki is the first of many high-profile entertainers to be announced to perform.

Over the past few years, Bud Light has taken over cruise ships, hotels and even an entire town. For its next act, the Official Beer Sponsor of the NFL will create the ultimate #UpForWhatever experience at Super Bowl XLIX: Bud Light House of Whatever.

As a continuation of the brand’s “Perfect Beer for Whatever Happens” creative campaign, which was introduced at Super Bowl XLVIII and continued with this summer’s Whatever, USA, event, Bud Light is bringing the first-ever House of Whatever to Super Bowl XLIX, featuring three days of unforgettable parties, amazing concerts and one-of-a-kind activities. Just like Whatever, USA, the House of Whatever will reward consumers 21 and older who prove they are truly up for whatever happens next.

“Our fans have really enjoyed the ‘Up For Whatever’ activations we’ve done this year, from the ‘Epic Night’ spot during Super Bowl XLVIII to this summer’s incredible Whatever, USA, experience in Colorado,” said Alexander Lambrecht, vice president, Bud Light. “House of Whatever will keep that spirit going, so expect it to be the most unique party experience in Arizona. You could say it’s the Super Bowl version of Whatever, USA.”

Bud Light’s House of Whatever will feature larger-than-life performances and surprise appearances from numerous artists and celebrities, including Grammy-nominated DJ Steve Aoki, who will perform one of his high-energy sets on Saturday, Jan. 31. The brand will reveal more talent announcements in the weeks to come.

This summer, Bud Light transformed a town into “Whatever, USA,” a city full of spontaneous fun. The epic weekend included 17 performances from top artists and many unexpected celebrity appearances. The House of Whatever will feature the kind of surprises and spontaneous fun that made Whatever, USA so unforgettable for the Bud Light fans who attended the weekend.

The brand will also create multiple ‘Whatever’ experiences in the weeks leading up to the Super Bowl to help consumers 21 and older maintain the #UpForWhatever mindset.

To learn more about Bud Light House of Whatever, go here.

About Bud Light
Introduced in 1982, Bud Light is a premium light lager with a superior drinkability that has made it the best-selling and most popular beer in the United States. Bud Light is brewed using a blend of premium aroma hop varieties, both American-grown and imported, and a combination of barley malts and rice. The light-bodied beer features a fresh, clean and subtle hop aroma, delicate malt sweetness and a crisp finish that delivers the ultimate refreshment. For more information, visit www.BudLight.com.