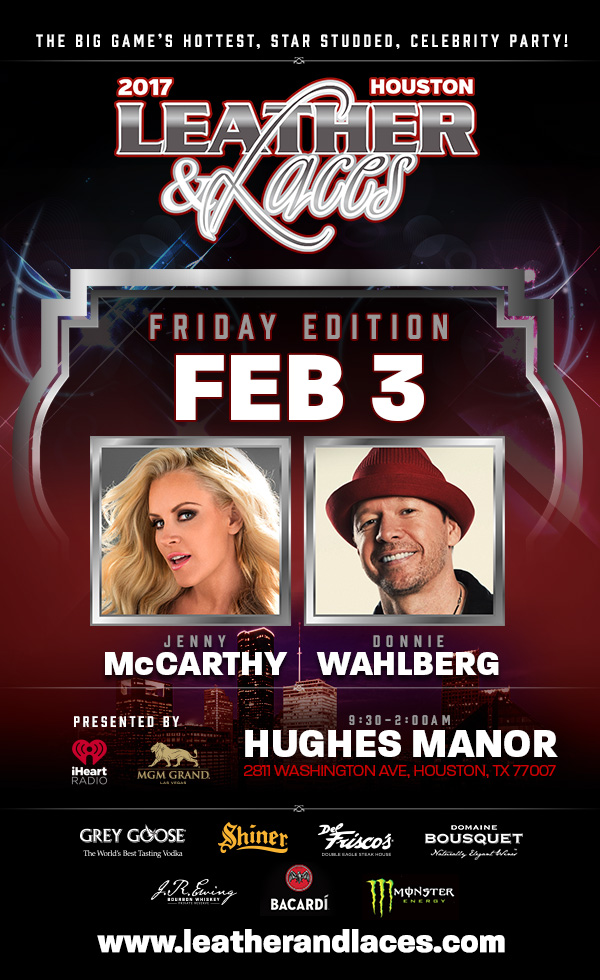 TICKETS: OFFICIAL SITE: USE INVITE CODE SSHQ AT CHECKOUT TO SAVE $10 OFF EACH ITEM

New Kids on The Block member Donnie Wahlberg his main squeeze Jenny McCarthy are hosting the 2017 Leather & Laces Super Bowl Party in Houston. The Leather & Laces Party is in its 14th consecutive year, and for a good reason. It is a total blast for everyone: guys, couples, and groups of women. On top of the open bar, the amazing DJ, and great central location, you will never know which celebrities will come through this event. In New York, we aw Steven Tyler, Paris Hilton, Justin Bieber. And in many other cities we saw more celebs. But don’t go for the starpower. Go because it is an actual Super Bowl Party, not a concert that you can see anytime in Vegas. It’s not 5,000 people. Its a smaller event. It’s sexy, it’s exciting, and you look around and people here are in full celebration mode. Of course, the crowd will be greeted by the celebrity hosts, and there will be great looking people in this event, so it is eye candy galore here. We will have to say that the $750 VIP or Table Service is pretty much the only way to go. Though the price is double, the access is like times 10, in our opinion.This year the events are at The Hughes Manor in Houston. The Hughes Manor Campus (including Charles de Gaulle space) is located centrally at 2811 Washington Street in the Washington, Heights District. This location is just 5 minutes from downtown Houston. Fashioned in a city rich with history and grandeur, Hughes Manor has followed suit by marrying modern luxury and industrial-chic décor. Friday Night’s hosts are celebrity couple Donnie Wahlberg & Jenny McCarthy.

Now because of the demand, there are now two nights to attend. Fashion, style and pure sexiness are the flavor of this party; where the cool, trendy, rich and famous flock to enjoy hand-rolled Sushi, open bars with ultra premium liquors and champagne, as well as trays of delectable hors d’oeuvres and desserts.

​With two jam-packed nights, amazing Hosts and a bevy of Hollywood celebrities and athletes as guests every year….. It is a proven fact; “Leather & Laces” represents all that Super Bowl weekend is meant to be: Glamour, Glitz and Excitement!​ 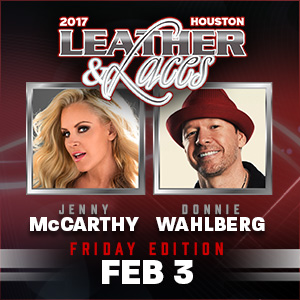