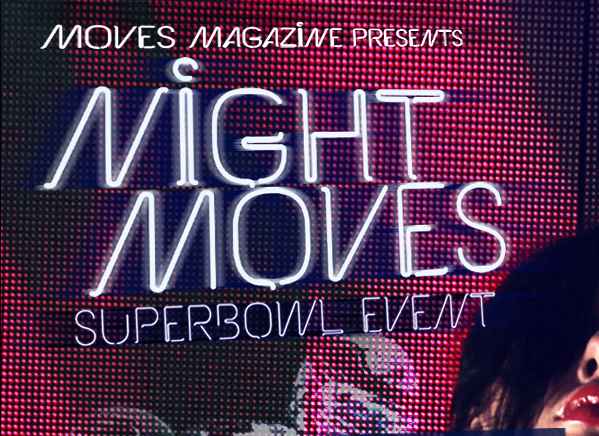 One of the Top 10 Events of the Super Bowl week will be Wednesday’ night’s VIP bash, Night Moves.  Moves magazine announced this week that Grammy-nominated pop rockers The Ting Tings will perform at the Moves magazine Kick-Off Party on Wed., Jan. 28 in Scottsdale, Ariz. The award-winning British duo, comprised of Katie White and Jules de Martino, will join hip-hop pioneer, Grammy winner and Rock & Roll Hall of Fame inductee Grandmaster Flash as the headline entertainment for the much-anticipated return of the magazine’s annual Wednesday night party. Hosted by former NFL All-Pro linebacker turned film director Simeon Rice, the event will be held at the retro-chic Hotel Valley Ho, the swanky getaway for 1950’s Hollywood, located in Scottsdale’s downtown arts district.

The Ting Tings, who recently released their third studio album, “Super Critical,” have been a favorite on the British music festival scene since 2008, when their album, “We Started Nothing,” hit number one in the U.K. White and de Martino crashed the party in the U.S. in 2009 when The Ting Tings were nominated for Best New Artist at the 52nd Grammy Awards. Their star continued to rise in 2010 when they appeared as the featured musical guests on Saturday Night Live. The duo, who have lived and recorded in Berlin, Paris, Ibiza andNew York City, and worked with producers such as DJ Calvin Harris, have charted five singles on the UK Top 40 and topped the Billboard dance chart in the U.S. The video for their single, “That’s Not My Name,” has been viewed more than 34 million times on YouTube.

Moves magazine, formerly known as the premier publication for professional athletes, has evolved under new ownership, relaunching as a diversified media company covering the luxury lifestyles of athletes, entertainers and influential tastemakers. This year’s party, dubbed “Night Moves,” celebrates the official launch of movesmagazine.com, and promises a return to the energy and late-night revelry of its infamous Wednesday night parties that have been one of the hottest tickets during pro football’s biggest week over the past decade.

“Moves has had a decade-long tradition of kicking off the festivities with a party on Wednesday night that people talked about all week,” said Moves CEO and publisher Jay Levy. “We are taking that to the next level with the energy and excitement of the Ting Tings, not to mention the legendary Grandmaster Flash as well as other surprise guests that will put this party in a category by itself.”

Moves Editor-in Chief Kelli Fabian said the vibe for the bash will be a chic, intelligent throwback to the decadence of the 80s, the heyday of Studio 54 and the renegade artistic spirit of Warhol and Basquiat. New York-based creative juggernaut Dimitri Falk will oversee the experiential design and atmospherics reflective of the Moves brand, providing a provocative look inside the celebrity culture of sports and entertainment.

“The worlds of entertainment, sports, media and celebrity have converged, and Moves is at the heart of it,” said Fabian. “This brand is all about the lifestyle enjoyed by professionals who are at the top of their games, and our party will have all the style, exuberance and sex appeal that comes along with it.”

Event host Simeon Rice, a Phoenix resident, was a member of the 2003 Super Bowl Champion Tampa Bay Buccaneers. He recently directed his first feature film, the suspense thriller, Unsullied.  The Moves party on Jan. 28 will feature an exclusive preview of the film at the Hotel Valley Ho as part of the night’s sensory overload.

Moves correspondents will be conducting red carpet interviews and gathering video content for the website during the party and throughout the week. Currently in beta, the site is accepting advertising and will officially go live prior to the big game on Feb. 1. Editorial and executive offices for Moves are located in Miami, with sales and marketing teams based in Miami, New York City and Los Angeles.

A limited number of general admission and VIP tickets, as well as red carpet access VIP tables with bottle service, are available for purchase at www.movesparty.com.