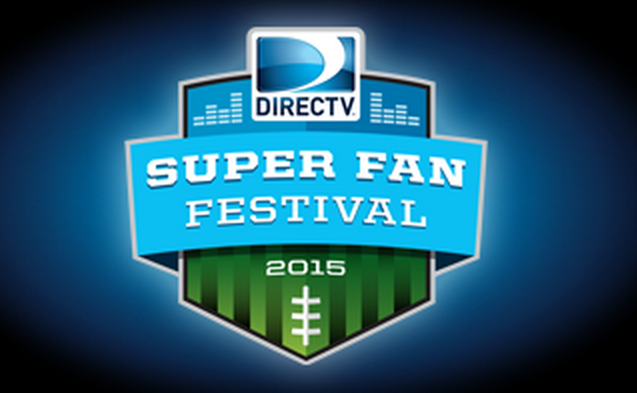 Super Bowl week is heating up!  DIRECTV, the perennial host of star-studded, must-attend events on Super Bowl weekend, is setting the stage for the biggest pre-game bash ever – an unprecedented, three-day music festival featuring some of the top names in the industry. DIRECTV Super Fan Festival will feature 13 concerts beginning daily at 5 p.m. Wednesday, Jan. 28 to Friday, Jan. 30 at the Pendergast Family Farm in Glendale, Arizona’s Sports and Entertainment District, across from University of Phoenix Stadium in Glendale, the site of Super Bowl XLIX.

The multi-stage festival will feature a concert every night with headliners Zac Brown Band, Calvin Harris, Imagine Dragons and Snoop Dogg on the DIRECTV Super Fan Stage. Preceding the main event musical acts including Alesso, Thomas Rhett, Young the Giant, Ingrid Michaelson, American Authors, Jason Derulo, Sam Hunt, Magic!, The Cadillac Three and Becky G will perform at the HGTV Lodge. Fans can purchase a single day ticket or a three day pass that will give them access to all Festival events through StubHub, the exclusive ticket partner of the DIRECTV Super Fan Festival. Tickets begin at $99 and are available for purchase now in limited supply. On-site parking is included in the ticket price.

On Saturday, Jan. 30, the space will be transformed to host DIRECTV Super Saturday Night, the private, invitation only event that has become known as the crown jewel of Super Bowl parties. Details on the special guest performance and celebrity packed event will be announced in the coming weeks. The DIRECTV Super Fan Festival line-up includes:

Fans will be also able to hit the links with a Par 3 Closest to the Pin Contest; take part in Football Skills Challenge and enjoy a cold one at the Bud Light Biergarten. Food Network is also bringing the “Cutthroat Kitchen Experience” on site, providing fans with the opportunity to win cash and prizes. Popular HGTV duos, Jonathan Scott and Drew Scott from “Property Brothers” and cousins Anthony Carrino and John Colaneri from “Americas Most Desperate Kitchens,” will join in on the fun by emceeing the concerts held at the HGTV Lodge. Adding to the excitement, fans will be able to experience both The Dan Patrick Show and The Rich Eisen Show as they broadcast live daily from the festival beginning Monday, January 26. Both shows will host a bevy of athletes, celebrities and Hall of Famers each day leading up to the Big Game. Influenced by the Old West, elaborately designed studios will bring the essence of American Frontier into the homes of viewers nationwide. The DIRECTV Super Fan Festival will also serve as the official broadcast location for FOX Sports 1 all week.