Special Performance by: Nick Jonas And Music by: D-Nice 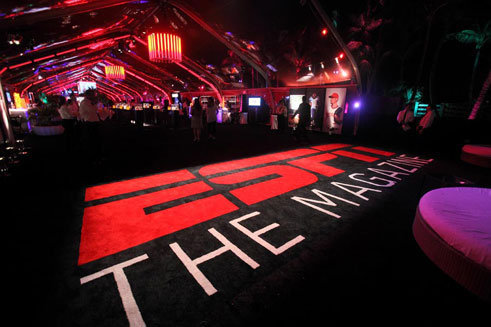 ESPN will host its 12th annual Super Bowl event, ESPN The Party, on Friday, Feb. 5, in San Francisco. In conjunction with the release of ESPN The Magazine’s Super Bowl issue, the event will feature a special live performance by multi-platinum selling GRAMMY-nominated singer/songwriter Nick Jonas, along with music by D-Nice. ESPN will take over the Festival Pavilion in Fort Mason, which in 1941 was home to over a million military men and women as they boarded ships to sail the Pacific to begin Hawaiian relief efforts after the attack on Pearl Harbor.

And right off of the red carpet is the EXPRESS Interview Lounge where celebrity co-hosts Will Reeve of ESPN’sSportsCenter and fashion model Devon Windsor will interview talent for distribution on ESPN.com and EXPRESS owned channels.  Inside the event, EXPRESS will be screen-printing exclusive, limited-edition ESPN The Party graphic T-shirts.