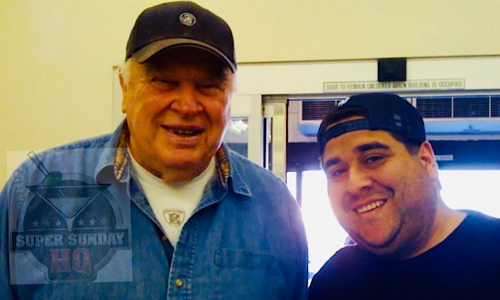 29 Dec A LEGEND IN BOTH THE SPORTS WORLD AND THE VIDEO GAME WORLD HAS RECENTLY PAST AWAY, JOHN MADDEN.

We at Supersundayhq have been covering Madden Super Bowl Parties for many years as the party’s name screams Super Bowl Champion and a leader in the video game business both recognizable by younger generations and the generations of old. As we have covered these Super Bowl Parties, I remember interviewing a younger Antonio Brown who said he was really excited and couldn’t wait to meet John Madden at the Madden Bowl Super Bowl Party. When I had to break the news to him that Madden never attends these parties, Antonio had the biggest look of disappointment on his face. He then said, “Where is he?” I said, “I believe he’s sitting at home with his family in (the Bay Area) Pleasanton, California right now!

I used live by this amazing man that had won 16 Emmy Awards as a broadcaster, just outside the East Bay Area, still close to Oakland. John Madden still holds the title as the Head Coach of the Raiders with the most wins in their history at 103. I would see him around town from time to time. John was really a staple in his small Pleasanton community and always involved his close sports friends and family at his charity events at the local Italian Restaurant Campo Di Bocce, that was just a stone’s throw from his house.

We at SupersundayHQ were lucky enough to have covered his co-hosted Bocce Ball tournaments many times! This event was very low key and without a lot of press, but just about John having fun with his friends and family. We would always see his co-host, Coach Steve Mariucci, there as they were close friends, amongst other former players & friends. The Bocce Ball Tournament was a charity event that gave to a lot of local charities and has raised over 8 million dollars over the years. The “Battle of the Bay” Bocce Tournament is still going strong after 23 years with Steve Mariucci now heading it up at the Los Gatos location.

Just a couple miles down the road from where the tournament was held, is a local shopping center and another fond memory I have of John Madden. I ran into him at Toys R Us, not in his coaching gear or dressed up suit he wore for announcing big games, but in ordinary clothes. He had at least 3 shopping carts filled with toys, almost falling out of the carts! He had UFC figures, to sporting goods! I said, “What’s with all the toys?” and he stated that they were “Christmas gifts for his grandchildren.” I offered to help him with all the carts to the car but he thoughtfully declined. John had the biggest smile on his face that day and seemed really excited to give all those toys to his grand kids! He didn’t have someone else helping him with all the carts or send an assistant to shop for him, he was in a proud grandfather mode. I could tell that this was all him and that’s who I believed he was on and off the football field, generous, loving & real. The picture above was taken that day at Toys R Us. Bless you, John Madden, your family, and all that you have done for all our generations!