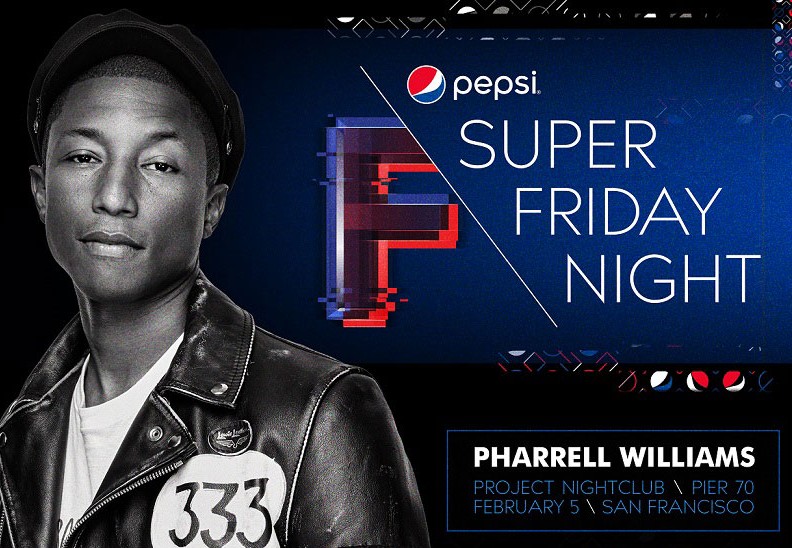 DIRECTV, now part of the AT&T family, and Pepsi today announced that they will join forces in San Francisco leading up to Super Bowl 50 to bring fans an unforgettable weekend of music, technology and art around the biggest sporting event of the year.

DIRECTV, long known for hosting the must-attend events of Super Bowl weekend, and Pepsi, a pop culture leader in sports and music, will provide fans with the ultimate experience at San Francisco’s Pier 70, when they host three nights of live concert performances featuring Dave Matthews Band, Pharrell and more. Guests will be able to experience the week’s offerings including exclusive DJ sets and nightly performances by some of the top artists in music. The innovative and premium space will be designed specifically for never-before-seen fan engagement and features state-of-the-art sound systems, unique artistic designs and projection-mapped photo walls for an immersive social media experience.

Artists performing each night include:

“DIRECTV has had a significant presence at Super Bowl weekend for the last 10 years with A-list parties and the hottest performing music artists around, and this year will be no different,” said Brad Bentley, Executive Vice President & CMO at AT&T, Entertainment Group. “We are excited to celebrate Super Bowl 50 in the ‘City by the Bay’ and to partner with an iconic brand like Pepsi to brings fans this incredible opportunity.”

“Since Super Bowl 50 is such a historic occasion, we wanted to create a disruptive and engaging experience that would match our customers’ excitement for the big game,” said Adam Harter, Vice President, Cultural Connections, PepsiCo. “Pepsi and DIRECTV are both respected for providing premier entertainment for fans, serving up unique pop culture moments around the Super Bowl. This partnership will be an organic way of bringing our collective vision to life.”

Sponsors of the three day event include SHOWTIME, Miller Lite and JETLUX.